As we saw at the end of my post last week, there has been a drop in the number of exits in the last year in the UK.

When we talk about exits for early stage businesses, we are looking at liquidity events for the investors who have bought shares in the company, as well as - potentially - the entrepreneurs that founded the business. For these early stage business, we are discussing two possible events: an initial public offering (IPO), or sale of the business to another organisation - 'Trade Sale' or 'Acquisition'.

In the case of a trade sale this is a clear exit for both investors and entrepreneurs, offering them the chance to sell their entire shareholding and thus 'exit' their position in the business.

However, while IPOs will allow investors and entrepreneurs to exit if they wish - and are able to find a buyer - it is not the primary purpose of the event. IPOs are primarily a way for a business to raise further capital through selling shares to the public alongside those sold by investors, so there is a different goal in mind.

For early stage businesses in the UK that have received equity investment, IPOs have never been a common occurrence. However, they have been on the decline since 2014, both in terms of amount raised and number of IPOs.

More stark is the decrease in the amount raised. In 2017 these nine IPOs raised a total of £279m, down nearly 60% from the £689m raised in 2016 by the same number of IPOs, and only a quarter of the total raised in the peak year.

You may look at these figures and think this is just a downward trend in businesses going public in general, as more companies are staying private for longer. But in the group of businesses that Beauhurst tracked, this is an even larger decrease.

While the wider trend is undoubtedly true when we look at some high profile tech companies that stayed private for an unusually long time (think Dropbox, Uber and Spotify), for the Beauhurst businesses, they have generally followed the trends on the LSE. With that said, last year the LSE did see an increase in the number of listings, as opposed to this drop for equity backed businesses.

Whether this delay in taking a company public is being driven by an accepted increase in deal size and valuation - or the converse - is debatable. However, what is clear is that companies are able to wait and raise capital from deeper pools of money for a longer time, increasing the amount that is being raised before an IPO and reaching an average of £21.2m raised before IPO in 2017. 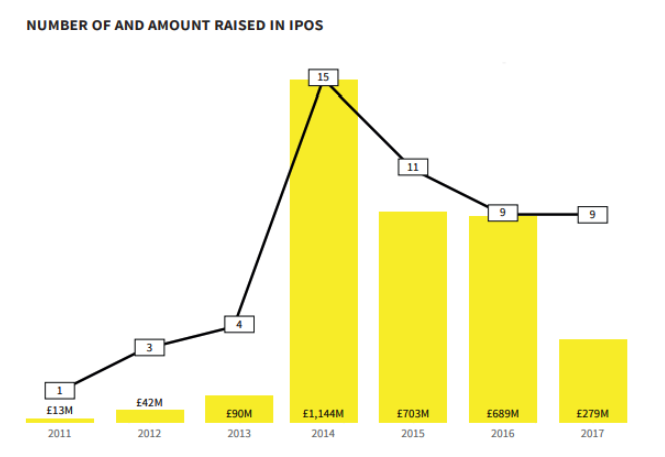 In recent years the number of acquisitions each year have continued to rise against the trend seen in IPOs, showing a preference of this route to an exit for equity backed businesses, allowing them to continue their growth before listing.

Interestingly though, this decrease came only in the earlier Seed- and Venture-stage tracked businesses, while the number of growth stage businesses being acquired in 2017 increased from 65 to 67. This supports the continuation of the trend of equity backed businesses increasingly preferring to exit through acquisition than through IPO, keeping the business private for longer and waiting for the correct time to sell.

What is interesting to note is that the top investor in acquired businesses was BGF, formerly known as the Business Growth Fund, who is also the most active investor into growth-stage businesses. 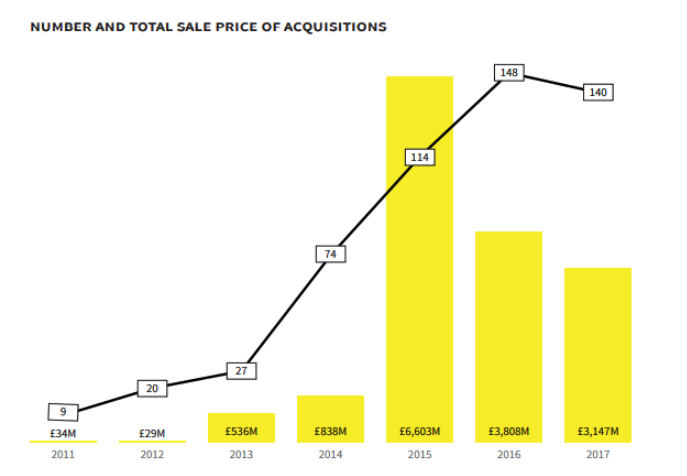 All of these above trends point to a more patient approach to raising capital, particularly when we look at the funding being used at later stages. Businesses are staying private for longer and raising more capital before listing or being acquired, shown by the jump in both average pre-money valuation, from £11.3m to £18.2m, and average deal size from £3.5m to £6.8m.

As mentioned earlier, whether the increased investment available is allowing companies to be patient or companies are determined to stave off exits, which is demanding larger tickets, is debatable, but it seems there is a welcome move towards more patient capital.

This goal was promoted in recent years through the patient capital review, which looked at the types of capital available for growth businesses in the UK. In the review it was clear there was a much more patient pool available in the UK over our European peers, but this was most often at the Seed and Venture stage, leaving a gap in the follow-on funding rounds in the growth stage.

Funding rounds in the range of £5m to £50m were highlighted as being particularly difficult, which seems to be finding some resolution as the average deal size pushes into this range. This brought a high level of support for the establishment of patient funds to invest alongside private investors.

Highlighted as great drivers of patient capital are the Venture Capital Schemes - Enterprise Investment Scheme, Seed Enterprise Investment Scheme and Venture Capital Trusts - which promote patient investment into early stage businesses, each targeted at different stages. Attention was drawn to the limitations of these schemes for knowledge intensive companies where there can be a significant delay to proving the market fit and achieving revenues, limiting the capital being made available.

We saw the results of this review during the Autumn Statement, with the announcement of a new £2.5bn fund managed by the British Business Bank focused on patient capital to address this gap in the funding. Alongside this was an expansion of the EIS scheme for knowledge intensive companies, as well as a commitment to restrict Venture Capital schemes to limit the use of the schemes for tax reduction strategies, as clarified in the Finance Bill 2018, which received Royal Assent yesterday.

As we discussed previously, it is not necessarily the case that businesses remaining private for longer is better for the businesses themselves. Certainly the inflation of valuations and cost per acquisition may be good for the founders and investors, however this limits the potential buyers and may restrict the ability for the business to be acquired and taken through the next stage of growth. This could limit the scope of scale for fast growing businesses and ultimately slow or limit the potential scale that could be achieved if sold at the correct time.

It now seems that with the introduction of this new government-backed fund there is a ready pool of capital available across all stages of business growth to allow a business to scale, which is welcomed across the sector. This is evidenced by the reduction of the number of acquisitions and IPOs and the increased number and size of rounds we are seeing before exit.

It is perhaps, then, time to stop asking whether capital needs to be more patient and start looking more closely at the correct time for businesses to seek the correct exit to ensure they can continue to grow.

All data is provided by Beauhurst and is available in their annual report on equity investment, 'The Deal'.