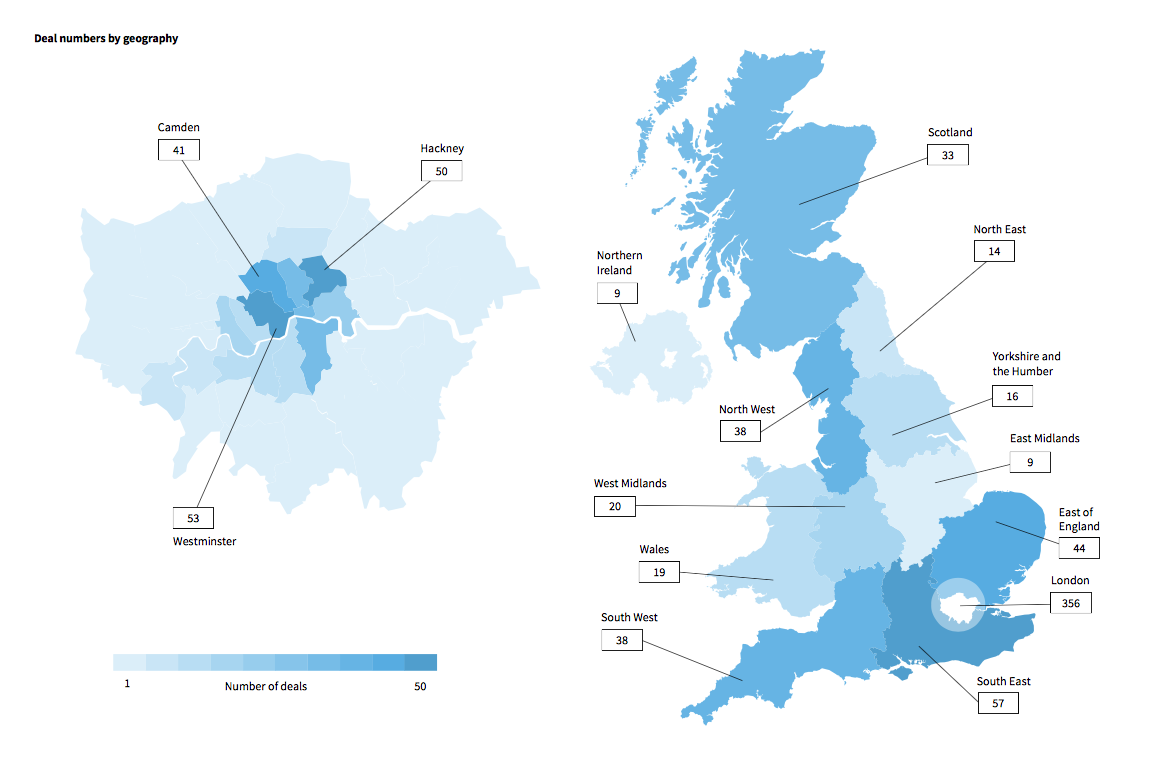 Having passed the half way point of 2017, there's always some great data published, and that from Beauhurst is particularly insightful.

According to the report, although deal numbers failed to recover from the previous year's low, the first six months of 2017 saw a record amount invested into UK high-growth businesses.

Confirming the growth in investment into UK high growth businesses, the report highlighted that the total amount invested increased by nearly three quarters (74.7%) from H2 2016, to a record £3.03bn.

However, deal numbers remained stagnant from the previous half, increasing by only 0.6%, with the number of deals still 3.5% lower than the same period last year, and later-stage companies saw a decline in deal numbers of 7.6%.

Importantly, the amount invested was boosted to its record level by two of the biggest deals ever seen - £389m for Improbable and £313m for FarFetch.

However, despite these type of large scale raises, figures show that deals worth up to £499,000 are the most frequently completed, with 170 deals in this region, and 110 completed deals between £2m and £4.99m.

Furthermore, the number of deals involving funds headquartered outside the UK continued to grow - increasing almost 27% on the previous three months - whilst the number of crowdfunded deals, seeing a total of £48m invested over 71 deals, decreased 18.4% from Q1 (including Crowdcube raising £3.2m for Vita Mojo and VentureFounders £4.7m for Hopster).

Although deal volume was down, the report clearly affirms our expectations that the long post-crisis economic recovery has continued into 2017.

Investment across the UK

Since January 2017, the report highlights that 13% of investment was made into companies looking to raise seed funding, with 26% taking venture capital and 61% private equity growth capital.

Moving across to geographical analysis, West Midlands has seen a soaring increase in deal numbers - a 40% increase in fact, which is similar to the South East - whereas the North East has actually seen a decrease (33%), the same as East Midlands (35%).

In some UK regions, the number of deals completed and reported remains relatively low; small changes in absolute deal volume can translate to large percentage shifts.

Investing in the next generation of British businesses

Earlier this year, Prime Minister Theresa May described the technology industry as a "great British success story" after a report revealed that investment in digital businesses spread across the country last year.

With the reach extending beyond London, nearly three quarters (72%) of VC and PE investment - accounting for £9.2bn - was allocated to regional businesses last year.

Leading in Europe, the UK as a country has attracted £28bn in technology investment in the last six years. By way of comparison, France and Germany have gained less combined - £11bn for the former and £9.3bn for the latter.

With talent and investment pouring into the sector, it has grown to be a major contributor to the UK economy. The Beauhurst report aligned the tech nation report by indicating that technology is the sector that's seen the largest increase in both deals and amounts invested over a period of six years.

In 2016, the Guardian reported that crowdfunding has boomed over the past five years, with entrepreneurs drawing in over £370m via online platforms in 2015.

As traditional sources of capital have floundered, demand for new methods of funding has risen - and despite crowdfunding deal numbers falling by 18.4% from Q1 to Q2 - Beauhurst reported in Q1 of 2017 that over £50m was invested into 87 deals via online crowdfunding platforms.

But what does this mean for you as an investor or potential investor?

Growing businesses are dynamic - they are driven by passionate entrepreneurs who are committed to further developing their product or service. Investing in one can be hugely rewarding, particularly if what it offers captures your imagination.

As a nation, every investor dreams of finding the one great investment that makes them a fortune.

In recent years, the UK government has made changes to the tax rules, with the aim of making investing in smaller stocks far more attractive to individual investors.

The introduction of the Seed Enterprise Investment Scheme (SEIS) is a perfect example. Introduced by the UK Government in the 2012/2013 tax year, its focus is to minimise the risk to investors investing in eligible startups. The SEIS offers tax relief of up to 64% (with loss relief reducing your capital at risk still further), which is over double that of the Enterprise Investment Scheme (EIS).

Having a multitude of potential benefits, we’ve pulled together informative guides to explain the key features of the schemes - find the SEIS guide here and the EIS guide here.

With the entire investing ecosystem encouraging continued investment, the Beauhurst report perfectly cements the common belief that whilst investment in the UK has its ups and downs, it's undoubtedly on a progressive path forward.

25 years of the Enterprise Investment Scheme:

How to pay less income tax: investing into the Enterprise Investment Scheme