For the last four weeks we have been looking at some of the detail included in the latest iteration of 'The Deal', an annual report by Beauhurst that looks at equity investment in the UK.

Looking at the year quarter-by-quarter, we saw that Q4 alone accounted for £3bn of investment, only 30% behind the previous record year in total. This is a staggering finding by itself, but becomes even more so when you realise that even if we remove this standout quarter, it would still allow 2017 to have reached a new high for investment into unlisted businesses.

The setting of records is not exclusive to one stage, with Seed and Venture seeing increases to £0.9bn and £2bn raised respectively. However, the rapid rise of investment into growth stage businesses. from £2.4bn up to £5.5bn, has overshadowed everything. This growth - to almost double last year’s total in this stage - is influenced to a large extent by the megadeals that have come to characterise last year, with approximately 13% of deals at this stage being over £50m, compared to only 3% last year.

However, as can be seen below, the shift to larger round sizes in general has contributed to the increased investment across all stages, pushing up the average investment to a record £6.8m across all deals. This is why we have still seen a drop in deal numbers across all rounds from peak numbers, though the Venture stage increased last year to essentially make back up the losses seen in 2016. 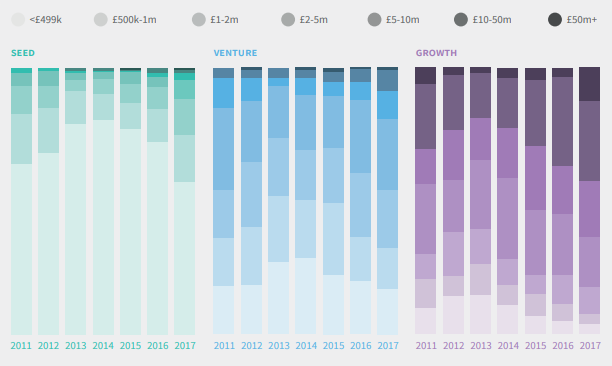 With this change to larger rounds, it is not surprising that the source of funding might have changed. As the deal sizes increase, the ability to write larger cheques becomes an important feature of a funding provider.

But has it actually changed?

The number of deals completed has increased for every category of investor type, with government funding, angel networks and corporate investors showing a small increase over 2016.

However, Private Equity and Venture Capital investors have seen a huge increase of nearly 20% more deals last year compared to 2016, due to their ability to invest a larger amount in each round. As we previously looked at, a large level of this activity has been supported by foreign investment. This is as you would expect given the increasing deal sizes we are seeing. 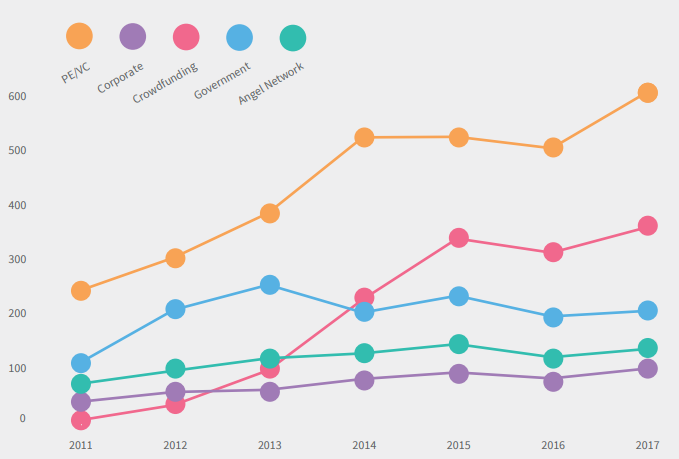 Crowdcube in particular continued to dominate the early stage crowdfunding subsector, attracting £87.3m and accounting for 40% of the total raised by these platforms, despite the lower number of deals than Seedrs. This goes against the trend that those who can write larger cheques are taking up the larger trends, as these platforms allow larger rounds to be filled by using their large user bases to group together in funding a round.

This has ultimately allowed for an increased deal size through the platforms, as well as in the wider industry, with the number of deals completed through crowdfunding under £499k decreasing for the last two years, while deals over £500k have continued to increase. Last year nearly 150 of the total deals on crowdfunding platforms were over £500k, up from just under 100 last year.

As can be seen from our analysis over the last few weeks, there has been a series of shifts that have been felt across the industry following both regulatory and sentiment changes.

2017 was undoubtedly a record year for investment into early stage businesses in the UK and this is not a trend that we expect to change this year. However, with economic and political uncertainty remaining, we will be watching closely how the industry continues to evolve.

The shift to larger rounds, led by the megadeals in 2017, has had a profound impact on the early stage investment sector, with companies becoming accustomed to these larger rounds and capital availability for the right deals. As average rounds have pushed up and up, so too have pre-money valuations, reaching a new high of £18.2m, meaning that the average early stage business that goes out to raise capital is now claiming it is worth, conveniently, £25m after the round is closed!

This is then leading to a shift in the sources for investment for these businesses, with Private Equity houses and Venture Capital firms taking a greater level of activity in this sector. While these funders have always been leaders in this space, they are taking an ever increasing proportion of the deals, as other funding partners have shown more modest growth in deal numbers over the last year.

While it is welcoming to see more capital available for scaling businesses, this inflation in pre-money valuations is becoming a barrier for good quality companies, with investors finding it increasingly difficult to achieve their goals from investment. In particular this means that as companies reach the stage where an exit is possible, the valuation they reach by that stage is eliminating some possible acquirers.

All data in this blog post - and the previous posts produced - have drawn on data from Beahurst's 'The Deal' (which is available to download for free here). A fantastically insightful annual report, the 2017 data has been particularly intriguing and I'm personally already looking forward to seeing what the next report will show us about equity investment in the UK this year.

James McKenna
Read more about The UK: leading the way as a fintech powerhouse