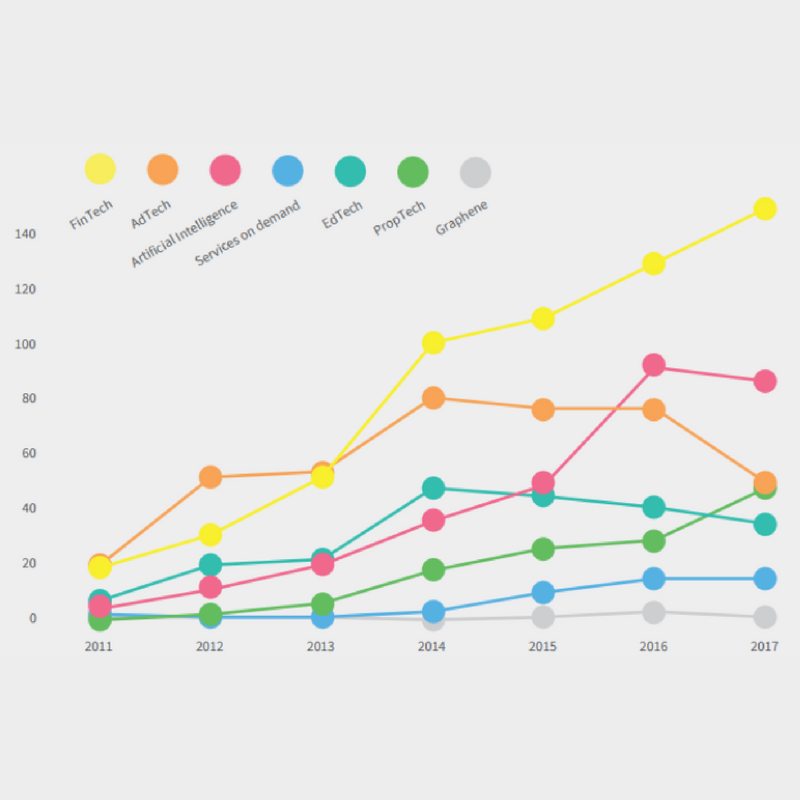 As we saw in my post from last week, 2017 was a record year for early stage investment in the UK and nowhere was this more prominent than in the fintech sector.

As a result, this week I want to look closer at this leading sector and dig further into some of the astounding figures that were achieved across the year. Alongside this I'll be taking a brief look at some of the other high achieving sectors in 2017 and detailing how they progressed in comparison.

Fintech as a leader

As a single sector, fintech managed to dominate the early stage investment landscape by attracting £1.3bn of investment over the year, accounting for over 15% of the total raised. While this might not sound like a huge contribution, it is worth remembering this is a single sector compared to all other companies out there raising capital.

By comparison, some of the largest following sectors managed comparatively small totals of £415m for the highly discussed AI sector, and £435m for food, driven by one stand out company (which I explain about more below).

Where these numbers come into focus most is looking at the growth compared to 2016 and previous years - the total is nearly triple the amount raised in 2016. Even compared to the previous peak in 2015 the total this year has stretched away to over double the £587m previous record.

However, the most incredible comparison is when we look back to the start of the data, to 2011, where fintech raised a total of £108.2m. This effectively means the total raised has increased by 1,100%! 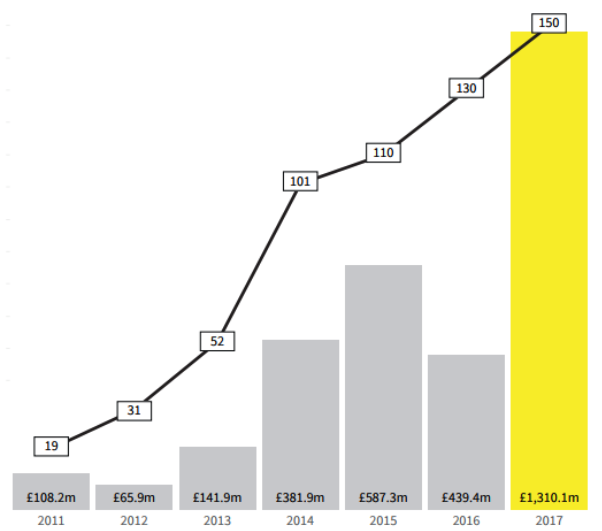 Meanwhile the deal numbers have been bucking the trend in technology this year by continuing the constant steady increase since 2011, with last year’s increase of 20 deals more representing a 15% increase over 2016. Therefore the average size of fintech deals has leapt to an unbelievable £8.7m per deal, nearly 30% higher than the overall average.

Continuing to follow on the topics discussed last week, fintech has - somewhat unsurprisingly - also taken a commanding lead in the megadeals that took place last year, as these large deals shape the overall data.

You can see from the graph included in the previous blog that as a sector, fintech took the majority of the megadeals in the year; seven deals with a total of almost £800m. The majority of these huge £50m+ deals came from banking companies.

Outside of these larger deals the challenger banks racked up a total of 19 raises, with a total of £500m, nearly half the finance poured into the sector. This shows the growth potential of these banks and the level of capital required in getting them up and running. Durham-based Atom Bank, for instance, raised £113m last year to take their total to date to over £280m from seven rounds.

However, as a subsector this does not represent as significant an increase over 2016 as the overall sector.

As we explored back in October, with our sector breakdown, the challenger banks managed a total of 22 raises in 2016, with a total amount of nearly £400m. Therefore the dramatic increase in sector total is also being spurred on by other subsectors, such as the newly popular cryptocurrencies that saw an 820% increase over the previous 2015 peak, with equity investment in 2017 of £42m.

All change in the chasing pack

While fintech took a commanding lead, only one other sector managed to increase their deal numbers in 2017. Proptech deal numbers jumped approximately 60% to 48 in total in 2017, passing Edtech and nearly managing to overtake previous leader Adtech in third place, which saw a significant drop in numbers. 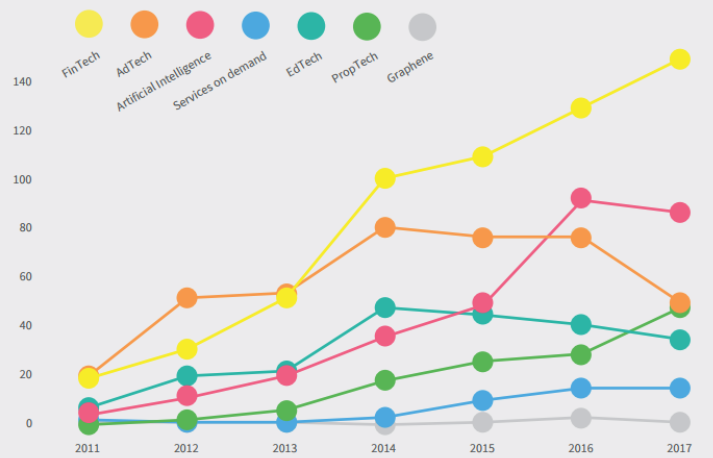 AI companies meanwhile continued to control their position in second place after taking off in 2016, despite the first drop in deal numbers since 2011, down to 87. Last year AI companies took in over double their 2016 total by attracting £415m, continuing the pattern of year-on-year growth that has been enjoyed since 2011.

And as promised by my comment in the opening paragraph, food saw an interesting year in 2017. The sector managed to attract more money than even AI, with a total investment of £435m across 53 deals. However, of this, 83% came from a single company - Deliveroo was undoubtedly the standout performer in the sector.

Overall, with £359m of investment alone in 2017, this included two of the megadeals, taking their total to £700m over eight rounds and ensuring unicorn status in 2017.

As you can see, this has been a great year for a handful of leading sectors, with some new sectors marking themselves out to watch over the next few years. In particular it will be interesting to see what happens in proptech as the housing crisis continues to bite - will we see it rise and overtake some of the previous leaders?

As always, thank you Beauhurst for the data and graphs for this blog, sourced from 'The Deal' 2017.

For equity investments in the UK, 2017 was a true record-breaking year

James McKenna
Read more about For equity investments in the UK, 2017 was a true record-breaking year