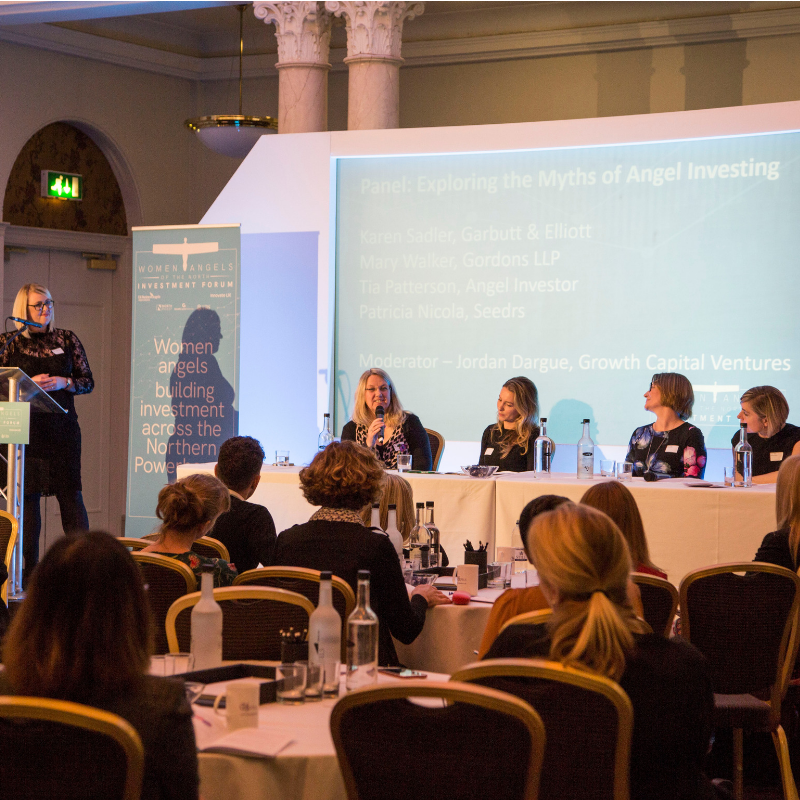 The very first angel investment forum targeted specifically at women in the north took place at The Queens hotel in Leeds on Monday (12th November 2018) and proved to be a huge success, with attendees hearing from some of the leading female names in UK angel investment.

Hosted by Jenny Tooth OBE, CEO of UKBAA, Jenny explained “Monday’s event was truly fantastic. We’ve known for some time now that women have the financial resources, knowledge and experience to support the next generation of British startups, yet the number of angel investors in the UK who are female is just 14% - and this decreases further when we look only at the north.”

“It was therefore brilliant to be able to host the first such event in the north. We’ve ran a number of successful events focused on women elsewhere in the country, raising the awareness of the possibilities of angel investing and encouraging more women to do what the research says they’re good at - one of my favourite stats is when a female investors backs a female-led startup, it's 21% more likely to succeed.”

“It’s so often thought that London and the south east is the driving force behind the country’s financial arena, but it’s clear the south’s northern peers - and specifically, northern women - are stepping up to the plate.”

“We undoubtedly need to encourage more women to become involved, but Monday’s event was more than simply a move in the right direction - it was a much needed opportunity to highlight to women in the north that the opportunities to become angel investors are vast and varied, and as individuals they’re truly needed to further bridge the gap between both male investors and investors in the south.

The key reasoning behind this event being run was recent research from the UKBAA that found whilst women have the financial resources to invest - women are responsible for 45% of the UK’s wealth - there are still multiple barriers to entry, many of which are unnecessary or misconceptions.

Discussing the gender balance, Jenny Tooth explained “We need more case studies and more women talking about their success stories. This is all about awareness and building confidence.”

“Most of the investment groups have been run by male investors. We advocate a forum in which diversity is the key.”

Further discussing the barriers to entry, GCV’s Group Operations Director, Jordan Dargue, highlighted it’s often misconceptions about angel investment that are holding women back, saying “It’s regularly thought you need tens of thousands of pounds to be an angel investor; that you need to have built up and sold a company and now have huge amounts of disposable income to invest - but that’s simply not the case.”

“The accessibility of startup investment opportunities today makes angel investing possible for most. Entry points can be as low as £100 in many instances, which makes it a much more open investment option. Yet so many don’t realise this, and this alone is one of the key barriers we need to break down.”

With plans afoot for the next such event in the north, it’s anticipated that 2019 will see the event expand to additional northern cities, and it was explained throughout the day that a collaborative approach is vital to encouraging more women to become angel investors.

Helen Oldham, founding board director of NorthInvest, explained “Jenny, Jordan and I have all experienced first hand the gender inequality in the angel investment space. It’s something we’re all driven to find a solution to - not simply because we want to, but because we need to. The UK needs more female investors.”

“Just as we’ve heard how female investors enjoy working collaboratively, and see more success this way, all three of us are dedicated to collaborating on this initiative. Between UKBAA, GCV and NorthInvest, we’re confident we’ll be able to encourage and support more women to become angel investors than ever before.”

“Co-investment is one of the foundational elements of many successful angel investments.” explains Jordan. Further elaborating on the importance of co-investment and collaboration, Helen detailed “Individually, we can all see success, but working collaboratively we can ensure we truly see more female investors backing the next generation of British businesses.”

Propelling the Powerhouse: unlocking investment from within the north

Michael Johnson
Read more about Propelling the Powerhouse: unlocking investment from within the north